ISRPA Board of Directors is comprised of Officers, Discipline Vice Presidents, and Area Directors who are charged with facilitating the mission and programs of ISRPA. 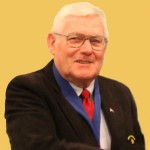